I love behavior style assessments. I do not love personality tests.

Put differently, personality tests are to behavior style assessments what a school lunch pizza is to a fresh Margherita pizza from Naples, Italy.

You must be thinking, “How could she be so dismissive to personality tests?”

Behavior style assessments allow you to understand your current strengths while also making room for you to grow and change in life. Personality tests seem so exact, so unchangeable. It feels like they are telling you who you will be forever and that’s something I don’t jibe with.

My personality is very bubbly. Life excites me, and I enjoy being happy. Those traits are very dominant when you interact with me. For some people, my personality proves to be too much for them, or comes off as disingenuous. With that, when I was younger it was very difficult to hear that feedback about my personality. I felt so attacked that I could hardly hear what the actual observation was. When I learned to pivot the conversation to gain feedback on my behavior, that’s when I was able to adapt to those around me. It felt way less personal, less debilitating, and easier to make a change.

[Read “Here’s the Fundamental Difference Between Behavior and Personality”]

I was first introduced to behavior style assessments when I worked at Disneyland in California. While in their management intern program, we all went through this assessment to better understand how we primarily behave in the workplace. Before we began the questionnaire, they prepped us with the idea that your behavior style will adjust as the years go on, your experience grows, and you encounter changes in your life. They let us know that there are four main styles, and then four substyles that would explain our current behavior.

This behavior style assessment used slightly different verbiage than that of Effectiveness Institute, so let me bring you up to speed.

The four categories were: Relater, Thinker, Director, and Socializer. Here are the direct parallels (more or less) between that assessment and Effectiveness Institute’s:

I took the assessment and got a result that would not be a surprise to anyone who knew me at that time. My style as I entered my first management role was a Socializing Socializer.

My main style was a Socializer, and my sub-style was also a Socializer. It meant I enjoyed interacting with others and sharing thoughts, feelings, and experiences. It indicated that I was receptive to change. It specified that I was optimistic and commonly praised others for their accomplishments.

Within about a year of taking that assessment, I decided to attempt it again to see if my style had changed. At that point in my life, I had completed my management internship with Disney and was working as a temporary manager waiting for a promotion to a permanent position. In my personal life, I had also just graduated from college. With all the learning and change that had occurred in that year, I was very curious about my result.

I now enjoyed challenging others, getting things done quickly, focusing on results, and had become much more independent. At that time, I couldn’t have agreed more with the assessment results. I had gained a lot of confidence after completing the internship, working in a role without another manager by my side at every moment.

I lived in the Socializing Director style for the next few years. I was managing teams and tasks, in charge of developing trainers and leaders, and leading part of logistical planning for so many events. In my last year at Disney, I had decided to take the assessment one more time. I had been in the role for four years at that point and was curious to see how I had evolved. Since then I had also welcomed my first daughter into the world, which was an enormously beautiful and life-changing event.

I took the assessment and it came back that I was now a Directing Director.

I was now more willing than ever to speak my mind, take risks, didn’t deal with limitations based on the status quo, and focused on opportunities within my team and organization. Truth be told, this was my favorite behavior style from during those years. I felt like such a force. I enjoyed standing up for what was right and questioning authority around that concept. I liked making forward progress towards new ideas that would otherwise be shut down because they weren’t “what we’ve always done.” I felt like I was supporting my employees and helping them achieve what was important to them.

[Read “You Are Not Your Behavior Style”]

Behavior Style Means Not Having to Take It Personally

Since then, I moved from Southern California to Seattle, Washington, worked in a leadership role at Starbucks, bought my first house, had another baby, and then eventually left Starbucks to start my own company. Throughout that time, I didn’t take another assessment.

Being more aware of my styles over the years, I could tell you I most likely stayed at Directing Director while working for Starbucks and then transitioned back to a Socializing Director after starting my own company. I could almost feel the shift. My role was so different as I was no longer leading a team. I went from leading employees for the past 10 years, to just leading myself.

I was very excited to take the Behavior Style assessment with the Effectiveness Institute a few months ago to see if my assumption was correct. It was! I had morphed back into a Socializing Director, which in EI speak is a Persuader-Controller. I’m still enthusiastic, optimistic, confident, and of course, enjoy working with people to get tasks accomplished.

If I had used personality tests throughout my career, I could have run the risk of being convinced I was just who I was, and never adapted to my roles or audience. However, just like when I learned to pivot feedback conversations to my behavior, I also learned to flex my behavior style for different life circumstances. That has served me well in both my career and personal life.

When I recently had friends, clients, and loved ones do Effectiveness Institute’s 360 Behavior Style assessment about me, I loved the results it provided. Not one person described my Behavior Style the same! It showed that I have been flexing between styles, which I would call a success.

I implore others to explore their styles often and use an expert to adapt different styles in your life. It has been so helpful for me, and I only wish the same for everyone else. 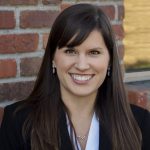 After a decade of supporting and developing those around her as a leader at the Disneyland Resort and Starbucks, she created her company with a simple philosophy in mind: teach others to be better at what they do so they can be happier with what they do.

Gina works with leaders, teams, individual contributors, and small businesses to help achieve desired workplace goals through the most important avenue: our people.